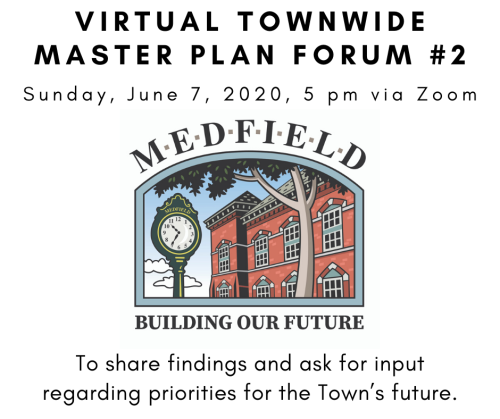 YOU ARE INVITED by the Townwide Master Plan Committee TO JOIN A VIRTUAL PUBLIC FORUM to share findings and ask for input regarding priorities for the Town’s future.

Format: There will be a presentation and interactive polling with a follow-up survey for feedback on the draft goals, objectives, as well as the impact of covid-19 on short and long term planning.
Purpose:

Join from a PC, Mac, iPad, iPhone or Android device:

There will be a few minutes before the meeting starts for you to test your audio/video with the ability to use the Chat feature for some technical assistance using Zoom. Additional Zoom resources are available on the Town’s website (under “News Flash”).

Please note: phone users will not be able to participate in the live polling but will be able to respond to the follow-up survey.

For more information regarding the Townwide Master Plan: https://town.medfield.net/350/Townwide-Master- Planning-Committee

Please add your comments or questions regarding the Townwide Master Plan here: https://forms.gle/izUGhBseGLh1Yw8D6

Prepare for the forum by reviewing the following documents:

John Kraus shared his recording (below) of the church bells rung on Memorial Day.  John made his recording in front of the Town House.

I observed Memorial Day by going to the former Medfield State Hospital to listen to the noon bell ringing at the Lee Chapel (the bell in the photo above, with the large sounding hammer showing to the right).  John Thompson, Chair of the Medfield State Hospital Building and Grounds Committee and the Property Manager, shared that the bell is inscribed “1896,” that one rings it from the clock room that is on what would be the second story, and that the Lee Chapel was constructed around the bell, as the bell is too large to be remove.

Comments Off on TWMPC’s virtual public forum at 5 PM on Sunday, June 7

Constructing a new building for zero fossil fuels must be done now, or
systems will have to be reconfigured at very high expense in the not too
distant future. Medfield is planning Dale Street for the town’s future so we
must incorporate a net zero goal at this time.

Governor Baker has committed to a close-to-net zero carbon emissions in
2050 for all of Massachusetts. The time is now to make this commitment in
Medfield and to design for the future.

By this document MEC is showing that other communities have made a
commitment to Net Zero buildings, and that many new schools are
explicitly modeling for this objective.

As options are reviewed with costs, financing, incentives, and energy
expenses projected, we are optimistic that, as has been demonstrated in
other towns, Medfield can construct a net zero building at a very
reasonable net cost, or even net profit. This is an exciting time for
innovation in this field and making this happen will require many in the
community to learn about new technology. Doing this for this large and
important school construction project will allow Medfield to take a major
first step in moving toward a net zero footprint.

Please let us know where and when we can further discuss this topic and
when this commitment can be included in the planning for Dale Street and
how it will be evaluated.

The MEC stands ready to help research and support this component of the
project.

Agenda for this evening appears below, and the back up materials (including the warrant articles for the annual town meeting) can be accessed here – 20200526-agenda &amp; materials 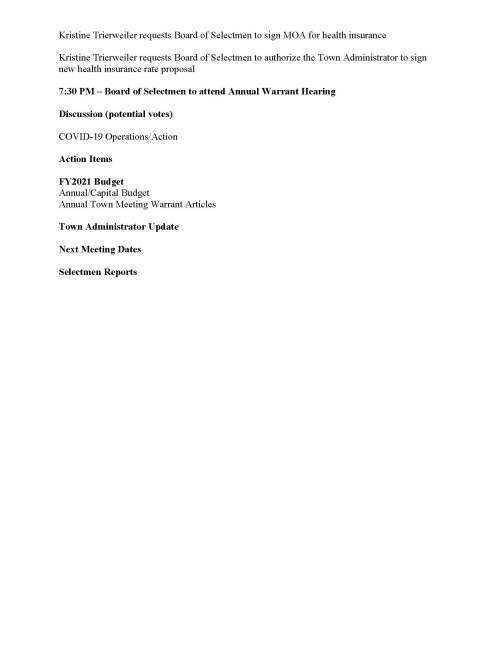 The Board of Health has announced the following case numbers of COVID-19 in Medfield:
32 cases confirmed
31 recovered

Comments Off on 32 cases confirmed, 31 recovered

Posted on May 21, 2020 | Comments Off on MHS graduation guidelines

Between now and July 18, graduation should be held virtually or in limited circumstances following safety protocols, such as car parades.

Beginning July 19, graduation ceremonies can take place OUTSIDE under certain conditions, assuming the public health data supports continued opening of our state, at that time.

Venues must have sufficient access to hand-washing facilities, including soap and running water, as well as alcohol-based hand sanitizers available at all entrances and exits.

Comments Off on MHS graduation guidelines

On Monday May 18th the department returned to normal staffing levels per the contract.  The number of routine calls has dropped over the last two months, as many do not want to go to the hospital in fear of potential exposures.  Since March 22, we have had 12 exposure forms completed due to flu like symptoms calls.  Two members were tested and both were negative and we have had no lost time due to the virus.  Surprisingly, we have had an increase in oven fires which is due to the increase in homeowners being at home due to the virus.

On March 1st, we began a special study at the request of the Fire Marshal.  The special study looks at the impact of COVID-19 and all emergency responses.  The data is based on entries into the department’s National Fire Incident Reporting System (NFIRS) software. The breakdown is as follows:

On Thursday May 21, our inspectional program resumed on a limited basis.  Inspections will not be conducted in any residence with occupants experiencing flu like symptoms.

We have been providing birthday drive-bys with Engine 2 over the last several weeks.  Several members of the department have volunteered and we have not used on-duty staff.

The Fire Cadet Program started the end of January and was cut short due to the pandemic.  High School seniors Liam Frazier and Jocelyn O’Toole participated in the program which lasted 6 weeks.  Unfortunately, it was cut short before it could be completed.

Comments Off on MFD status update