Young men in the news

Couple of recent nice articles about young men from Medfield, Matthew Aucoin on his music in the Wall Street Journal, and Gehrig Schilling on his baseball in the Globe West Weekly (searches just now at Boston.com produced no returns for that one) –

Comments Off on Young men in the news

Active citizen, Chris McCue Potts had recently focused the town on the problem of an invasive vine, and as a result of her efforts progress is being made.  Below are emails from the Superintendent and Director of the MPR, respectively.

Now just to solve the woolly adelgids confirmed by Mike Lueders (thank you Mike!) in the hemlocks by the tennis courts.

The MPR maintenance crew is out today ripping out and bagging as many vines as they can find and then spraying the roots with roundup.  The spread of the vine is all over town.  I noticed it just off they playground on Green Street, at the Pfaff Center and I am sure it has invaded private properties.  Either Ken and/or I will get the Bridge on Curve Street.
Best,

I’m very excited to let you know that our designer, Franklin Marval will continue the installation of three art boxes this Monday, Aug. 4. These will be similar to the one installed in front of Bank of America on Rte. 109.
He will work on the boxes on Rte. 27 – at South Street (featuring Hannah Adams), at CVS (featuring George Inness), and at Dale Street (featuring Lowell Mason). He plans to begin at 8 am at the South Street box and each one should take about 2 hours (weather permitting
We then anticipate one more day in the next week or so to install along Rte. 109 at South Street (across from Brothers Marketplace) and at the light at Shaws. I will update you when we have the schedule for that.
Thank you,
Jean

Comments Off on Art Boxes mushrooming

Tomorrow morning I will hold my regular monthly selectman office hours at The Center (on the first Friday of every month) from 9:00 to 10:00 AM.

Residents are welcome to stop by to talk in person about any town matters.  Residents can also have coffee and see the Council on Aging in action (a vibrant organization with lots going on).

Comments Off on Selectman Office Hours tomorrow 9-10 AM

Posted on July 30, 2014 | Comments Off on Brothers Marketplace

Reporting from the front, at the newly opened Brothers Marketplace, I can say that half the town turned out to see our newest retail business today.  It invoked memories for me of a crowded Midnight Madness, just with different items on sale.  Thus begins a new era and new traditions.

The build out of the place is certainly nicely done.  And everything literally shines. The food offerings pleased this viewer.

I am looking forward to sitting at the big wooden table that looks like it belongs in a country kitchen, and snacking on a coffee and the pastries.

Comments Off on Brothers Marketplace

I was one told that this item is actually owned by several towns which share is use.  A great use of regionalization.  David Stephenson has suggested that street sweepers should also be jointly owned this way, which makes eminent sense to me.
This is a rock remover.  Any idea where it is? 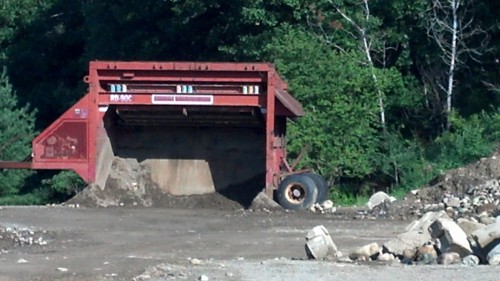 Comments Off on Where in Medfield?

Email from Bill Massaro about the Medfield State Hospital land urchase bill being lined up on teh Governor’s desk for signing on 8/2/14.  Who knew that bills get assigned signing dates a week in advance.

Here  is the link to legislation on the Governor’s desk:

According to the latest (7/28) posting, the MSH Purchase is scheduled for action on August 2.

On the Governor’s Desk

Update on legislation on the Governor’s desk for review and action.

All Legislation on the Governorâ€™s Desk

6.  H. 4216, “An Act Authorizing the Commissioner of Capital Asset Management and Maintenance to Convey Certain Parcels of Land in the Town of Medfield”

Comments Off on MSH legislation scheduled for signing 8/2

Posted on July 28, 2014 | Comments Off on Governor’s Opioid Task Force

This article on the opioid addiction issue was in the Massachusett Municipal Association’s monthly newsletter, The Bulletin –

The governor’s Opioid Task Force on June 10 released recommendations in the areas of prevention, intervention, treatment and recovery that are intended to strengthen the state’s ability to respond to the opioid crisis.

The task force was created following the governor’s declaration in March of a public health emergency relative to opioid overdoses. In response to the crisis, the governor pledged $20 million in state funding to boost treatment and recovery services. He asked the task force to develop priorities for how the funding should be spent.

The task force recommended the allocation of the $20 million to 24 separate initiatives. The top three priorities of the task force included:
• Development of a central navigation system that could be accessed through a toll-free number to provide information about treatment options and current availability (at an annual cost of $1.45 million)
• Creation of pilot regional centers that provide assessment, drop-in counseling and referral to treatment on demand, leveraging existing treatment organizations (at an annual cost of $1.8 million)
• Development of prescription drug monitoring program infrastructure to support safe practices for the prescription of opioids and new regulations related to the Public Health Emergency and accelerated enrollment of prescribers (at an annual cost of $1.5 million)

The increase in fatal opioid overdoses in Massachusetts parallels a national trend, with the U.S. Department of Health and Human Services deeming prescription opioid overdose deaths an epidemic in 2013.

This article from the Massachusetts Municipal Associaiton –

On July 1, eight communities joined the 182 that already assess a local-option meals tax, with at least two additional communities set to have the tax go into effect in October.

This brings the number of communities statewide that have adopted a local meals tax to 192, including the 19 communities that chose to enact a meals tax in the past year.

Though the meals tax is only three-quarters of 1 percent, it provides an opportunity for communities to bring in significant additional revenue. For example, revenue estimates from the Division of Local Services for fiscal 2013 show that Provincetown earned $518,320, Burlington earned $1.34 million, and Northampton earned $664,346.

Using revenue estimates from the Division of Local Services, the MMA calculated that the potential revenue that could have been collected by cities and towns if all communities had a meals tax was $110 million. Based on the number of communities that have adopted the tax so far, the MMA estimates that 90 percent of potential revenue is being collected and returned to cities and towns.

Attleboro, Berlin, Bourne, Georgetown, Holyoke, Medfield, Plymouth, and Spencer had the tax go into effect on July 1. Carver and West Bridgewater will begin assessing the tax starting this October.

The local-option meals tax became law in 2009. Cities and towns that accept the provisions of Chapter 64L may levy a local meals tax of three-quarters of 1 percent, which takes effect on the first day of the calendar quarter following 30 days after acceptance.

This from Chris McCue –

Conservation Commission member George Darrell and I live just several houses away on Curve St. and we recently discovered that we’re
both concerned about the rate that invasive plants are taking over Medfield, and we’re joining forces to educate residents and town
organizations about how they can help control them. We welcome anyone else who wants to help (not a big time commitment – probably
seasonal based on particular problem at hand).

Right now we’re focused on the Black Swallow-wort vine that is particularly invasive in Medfield since it’ll be going to seed in
about 1-2 weeks. See Patch article:

If you can help get the word out via your blog and encourage people to cut any vines back on their property before the seed pods
open – and encourage them to dispose of the vines in the trash (not yard waste or Transfer Station) — that would be a big help.
Pulling the vines out is a big task, but cutting off vines that have seed pods can be done relatively easily with a “weed whacker”
or hedge trimmer. The vines will come back and need to be cut again, but at least the seeds have been removed in the short term.

We need the town’s help too. Next time you’re at Town Hall, check out the area along the upper west side of the building – along the
fence and in the shrub area adjacent to Starbucks (the photo in the Patch article only shows a small section of the problem). That
swath of land is covered in this vine that now has countless numbers of seed pods. The vines have already started to spread in the
bed along the ground floor of the building near the back entrance, and they’re covering a rhododendron alongside the upper area of
the building. Cutting those vines will help prevent the spread of the vine elsewhere in town, but it has to happen ASAP. (The
library is also getting this vine again after George’s efforts in the past to eradicate it.)

At the very least, any chance you or someone else can get the DPW folks to cut all of the vines around Town Hall back before the
pods open?  Another troublesome spot is alongside Curve St. on the embankment that leads down to the tennis courts, and George or I
will reach out to Jim Snyder at Parks & Rec to see how we might tackle that site. Unfortunately, there are many other sites around
town (public & private) where the vine has taken over, so we’ll need a coordinated approach between the town organizations and
residents to help with the problem.

Anything you can do to spread the word, and persuade our various town organizations to help with this problem, would be much
appreciated.