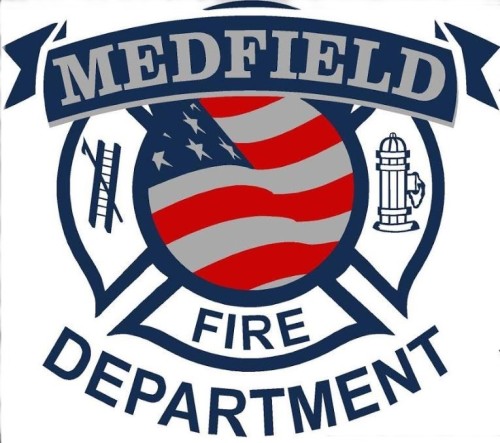 On Monday May 18th the department returned to normal staffing levels per the contract.  The number of routine calls has dropped over the last two months, as many do not want to go to the hospital in fear of potential exposures.  Since March 22, we have had 12 exposure forms completed due to flu like symptoms calls.  Two members were tested and both were negative and we have had no lost time due to the virus.  Surprisingly, we have had an increase in oven fires which is due to the increase in homeowners being at home due to the virus.

On March 1st, we began a special study at the request of the Fire Marshal.  The special study looks at the impact of COVID-19 and all emergency responses.  The data is based on entries into the department’s National Fire Incident Reporting System (NFIRS) software. The breakdown is as follows:

On Thursday May 21, our inspectional program resumed on a limited basis.  Inspections will not be conducted in any residence with occupants experiencing flu like symptoms.

We have been providing birthday drive-bys with Engine 2 over the last several weeks.  Several members of the department have volunteered and we have not used on-duty staff.

The Fire Cadet Program started the end of January and was cut short due to the pandemic.  High School seniors Liam Frazier and Jocelyn O’Toole participated in the program which lasted 6 weeks.  Unfortunately, it was cut short before it could be completed.

An appreciation of our town employees

An appreciation for a job well done

I have been thinking this morning about the Town of Medfield employees who provide we residents with the services that allow our lives to continue with as much semblance of normalcy as possible at all times, but most especially in these truly unsettling circumstances we are currently experiencing. Our water goes on, public safety continues to serve us, the Transfer Station even added Sunday openings, and all the town government systems continue to function, if behind a digital curtain, all so that we residents can continue our lives.

The town employees are providing essential services, so while they likely share the same unease that envelopes us all, they continue to work their jobs.  I wanted to publicly share with the Town of Medfield employees my sincere appreciation for their efforts  and to thank them.

I am extremely appreciative of what all the town employees are doing now, working under difficult circumstances – I want to let them all know just how much this one resident, one who tries hard to observe closely the functioning of the town government so as to understand it as well as possible, truly appreciates what our team of town employees are accomplishing for we residents. 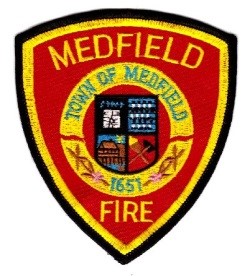 This email this past week from Fire Chief/EMD, William C. Carrico II

I am pleased to announce that the Town of Medfield ISO rating for structural fire suppression has changed from Public Protection Class 4 to Public Protection Class 3.  The ISO Public Protection Classification program plays an important role in the underwriting of insurance companies when dealing with personnel or commercial property insurance.  The lower the rating the better the delivery of services.  The new rating was made possible by the hard work of the Medfield Fire Department firefighters and fire officers. 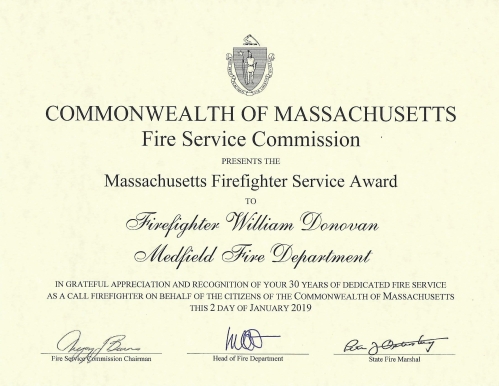 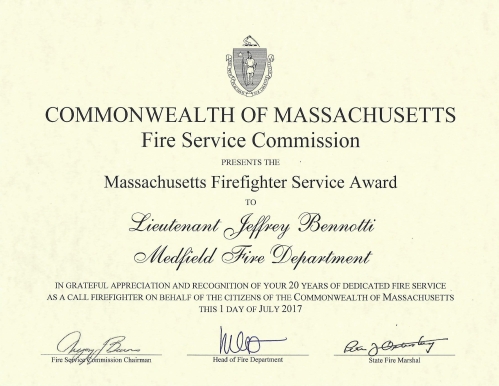 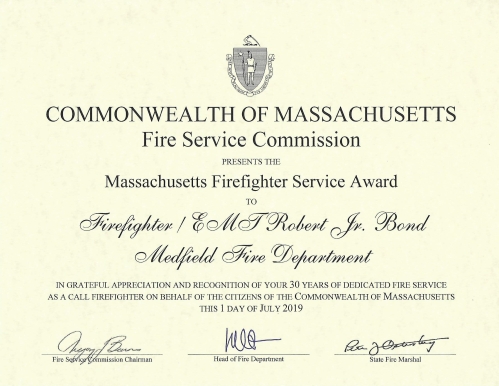 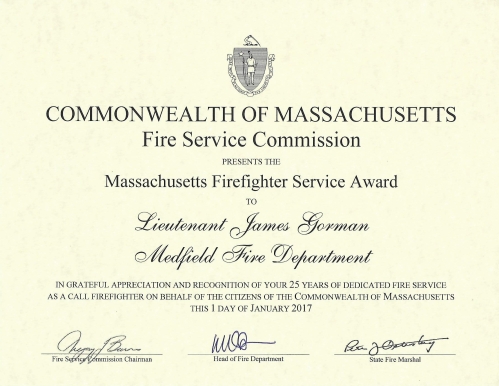 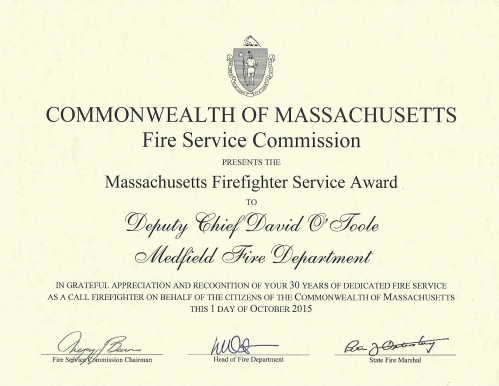 I was told at New ‘N Towne’s Ttouch a Truck event this morning that the firetruck that had the fire was a vintage 1980’s engine. 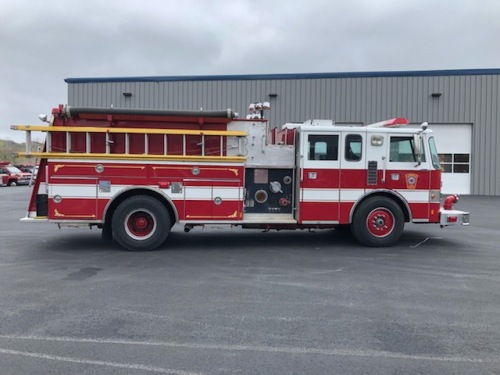 Specialty Vehicles is loaning us a 1989 Pierce Lancer with a 1500 gal pump and 1000 gal tank for $1.  The only requirement is we have to carry a min. of $10,000 of insurance coverage and register it as a Medfield Vehicle.

This morning at approximately 0945 hours, while performing truck checks at the fire station, an electrical fire started in the cab of Engine 3.  There is moderate damage to the cabs electrical system and the only way we could kill the power to the cab was to disconnect the batteries.  We are working with Specialty Vehicles of Plainville to find a temporary replacement for the engine.

30+ years ago, my Newton dog walker friend went in to the pond by the DeCordova Museum in Lincoln after her golden retriever that had fallen through the ice, and my friend drown.

25+ years ago my golden retriever, Charlotte, went into the Charles on our weekend run one March morning, off the really beautiful trail that goes along the river behind the police firing range, just at the point where the river turns, such that the full current hits the bank where Charlotte went in.  Because all the flow hitting at that point, the current was so strong that Charlotte had trouble  getting back to the opening, despite paddling as fast as she could.  For a few moments as I watched her struggle, I contemplated going in to help her out.  Why not, after all, I had gone in the water to “teach her” to swim as a puppy – but that had been summer.  Fortunately, Charlotte put on one sustained strong effort and got back to the opening and climbed out, and only one of us went home icy wet, while the other was left with strong memories of what almost happened.

Charlotte always went in the water on our winter runs, unless things were frozen solid.

The whole article is here – https://medfield.wickedlocal.com/news/20190206/medfield-firefighters-rescue-dog-that-had-fallen-through-ice

Medfield firefighters rescue dog that had fallen through ice 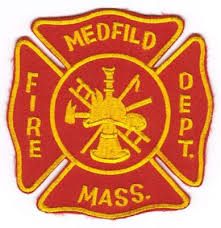 I was just notified that Medfield Fire has received the Student Awareness of Fire Education (SAFE) grant in the amount of $6,754.  This is the first time in several years that the department has taken advantage of this award program.  Fire Prevention Officer Lt. Mike Harman was instrumental in putting the grant application together, making sure it was sent out on time, and included key public fire and life safety initiatives planned for Medfield 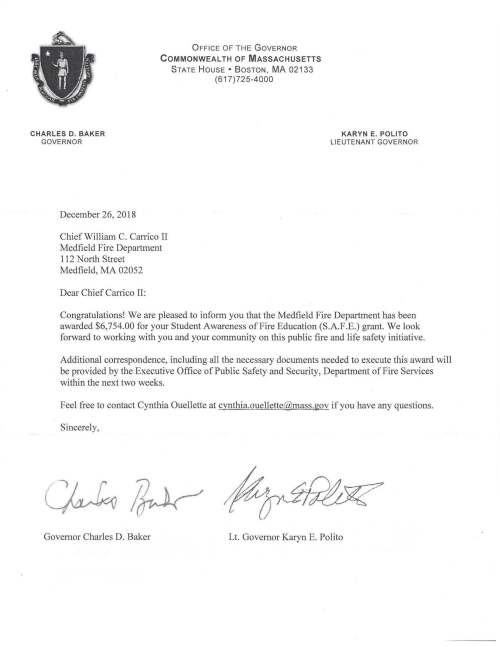 This today from Susan Gorog – 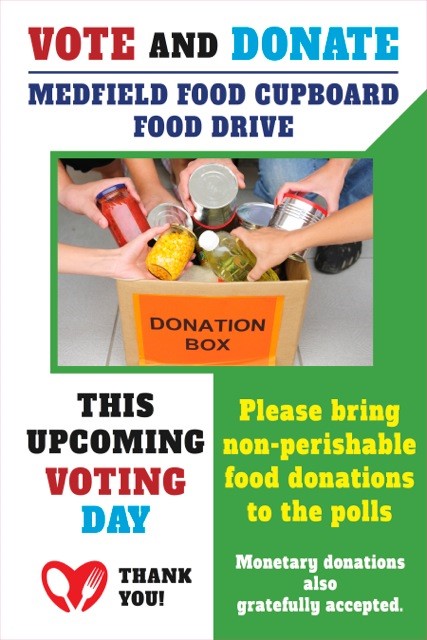 Don’t forget to Vote and Donate on Monday, June 11!  Food donations will be collected in a DPW truck at the voting polls…help us stuff the truck!

You can also stuff the truck on Tuesday – Saturday, June 12-16 at the Fire/Police station. THANK YOU!

Fire Chief William C. Carrico II will be leaving his Sandwich post next week to become the Medfield fire chief.

Chief Carrico did not respond to a request this week to explain why he wants to leave Sandwich and what he views as his top accomplishments during his four years with the town.

He did, however, discuss those topics with the Medfield Board of Selectmen during a televised meeting earlier this month.

He said that he had met the top challenges in Sandwich—building up staffing levels; ensuring that the firefighters and paramedics have safe, new quarters; and bringing professionalism to the department.

“I am ready to take on the unique challenges of Medfield,” Chief Carrico told the selectmen. He added that he wanted to come to the Medfield area for “personal reasons.”

Sandwich Town Manager George H. (Bud) Dunham said he was saddened by the news that the chief was leaving.

“I knew he was a finalist in Medfield and have been contacted by various people doing reference checks on him over the last few weeks, which led me to believe he was their primary candidate,” Mr. Dunham said in an e-mail on Tuesday, April 24. “It’s a huge loss to the fire department and the town.”

Chief Carrico helped the town secure a $1.2 million federal grant that enabled the East Sandwich fire station to be renovated and fully staffed.

“Staffing this station will reduce response times to East Sandwich and provide proper response times for fire and EMS calls,” Chief Carrico said at the time. “The FEMA grants are extremely competitive; to be awarded a grant of this size is a game-changer for the community.”

The grant came from the US Department of Homeland Security’s Federal Emergency Management Agency.

Mr. Dunham said at the time that the two-year grant would allow the town to hire firefighter/paramedics, and move ahead with its public safety plan, despite conflicting messages from voters.

At the 2016 Town Meeting, Sandwich residents overwhelmingly approved a $17 million plan to build a public safety complex in South Sandwich, and renovate the East Sandwich station—adding dormitories and other amenities. At that meeting, residents also approved a separate $750,000 allocation to hire eight firefighters/emergency service personnel.

But the $750,000 measure—technically called a Proposition 2 1⁄2 override—also required a majority vote during a regular election three days later. The override failed, narrowly, when voters went to the polls.

In the days before that Town Meeting and election, Mr. Dunham said that if the override failed, the East Sandwich renovations would be scrapped because the town could not afford to staff the improved facilities.

The $1.2 million grant changed all that.

The Staffing for Adequate Fire and Emergency Response (SAFER) grants were created to provide funding directly to fire departments and volunteer firefighter organizations to help them increase or maintain the number of trained, frontline firefighters available in their communities, according to the FEMA website.

Chief Carrico also helped negotiate for administrative offices to be added to the $17 million public safety complex now under construction at Cotuit and Quaker Meetinghouse roads. The complex will house a new police headquarters building and a fire substation.

“Receiving the award provides a sense of accomplishment because it is very competitive,” the chief said at the time. “My goal for Sandwich is to create a response structure that increases the safety of the citizens, the safety of the firefighters and, most importantly, decreases response times.”

Chief Carrico told the Medfield selectmen he had similar goals for that town. He also wants to add paramedics and ambulance service to the department.

Medfield Town Administrator Michael Sullivan said on Thursday that Chief Carrico’s salary has not yet been made public because contract details are still being worked out. The previous chief’s annual salary was $136,000, Mr. Sullivan said.

Medfield, southwest of Boston, encompasses about 14.5 square miles. The town, which has a population of about 12,000, has been searching for a new chief since last June, when William Kingsbury announced his retirement after nearly 30 years as chief.

“He’s the right man for the job,” Mr. Hollingshead said of Chief Carrico when introducing him to the Medfield selectmen.

Mr. Carrico served as chief of the Halifax and Duxbury fire departments before coming to Sandwich. He believes in beginning cadet programs and talking with high school students to encourage them to consider careers in emergency services.

“I like coming in and seeing what I can do to make things better,” Mr. Carrico told the Medfield selectmen. “I’m looking forward to it.”

From Wickedlocal for Sandwich –

Sandwich Fire Chief William Carrico has resigned from his post after four years leading the department.

Town Manager Bud Dunham advised selectmen April 26, that Carrico has submitted his letter of resignation in order to become the new fire chief in Medfield.

Dunham praised Carrico and his tenure in Sandwich.

“He’s a true leader in my opinion,” Dunham said. “He’s been great to work with. On many issues. A great sense of humor.”