The Board of Selectmen agenda and back up materials for the meeting at 7PM next Tuesday, April 3 are available here – 20180403-agenda 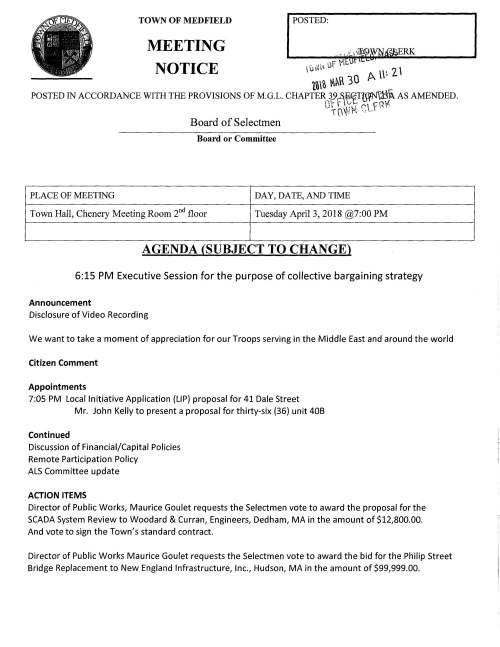 Nancy Irwin was suggested for recognition in the MFi 2018 Volunteer Awards by Maggie Joseph.  The following is Maggie’s eloquent description of how Nancy crafted what we all know and love as the Swap:

Every town has something to be proud of and Medfield is no exception. Since 1986, when the Transfer Station opened, it has provided a convenient place for garbage disposal. However, it has now morphed into something distinctive: a spot where the community can dispose of its trash and also dispose of unwanted items as well as pick up all kinds of stuff: furniture, kitchen ware, books, and much, much more. And with time, its name has morphed too, from the ugly word “THE DUMP,” to the functional word, THE TRANSFER STATION, part of which bears the friendly name, The SWAP. Popular with the Medfield community, the SWAP is a place to discard or to acquire stuff and to meet other “swappers” – and that is due in large part to Nancy Irwin who has transformed it from a disorderly and sometimes chaotic area into an organized, environmentally friendly and methodically arranged place to “shop.”

In 2008, Nancy Irwin started volunteering in the SWAP. In fair weather or foul, she has remained committed to her mission of recycling articles or saving what the community might find useful. She has been appointed Coordinator by the Transfer Station and Recycling Committee, and has the support of volunteers (like MaryPat who joined her in 2013) all of whom have contributed to the success of the SWAP.

Previously, people would wander around all day searching for items that were randomly placed. As Coordinator, Nancy now manages shoppers with an efficient use of time and place by making sure that they are allowed only thirty minutes a day to “shop,” so that everyone has a chance for the fair disposal or pick-up of goods. She also makes sure that articles are arranged by type of use, instead of being thrown together in a mish-mash of categories.

In addition, her petitions to the town for shelter from the elements were finally met with success. Two small tents to store items were donated by MaryPat, and Nancy also procured four to six umbrellas to protect people and the items themselves from the weather. Memo has donated two canopies, and the Town has purchased two permanent tents and one canopy. Eventually, Nancy petitioned the Town to pave the area, as it was unsafe.

Finally, through the environmentally-conscious spirit that has impelled Nancy to remain steadfast in her mission to recycle or re-use, the SWAP also saves the town a lot of money. It costs between $49 and $54 per ton to recycle items from the Transfer Station, but the amount decreases during the six months that the SWAP is open, a true benefit to the town. And once it is closed, Nancy and other volunteers are still busy, taking down and storing tables, shelves, bins, dollies, supplies, and canopies, plus recruiting volunteers for the next season.
Nancy volunteers in St Edward the Confessor parish as well. She helps with meals for the needy, making sixty meals a year for Haley House in Boston. She knits mittens for the homeless through the “One Family Knitters” at St. Edward’s. Nancy also coordinates the church’s Prayer Shawl Ministry and is the Usher Coordinator at St. Edward’s. 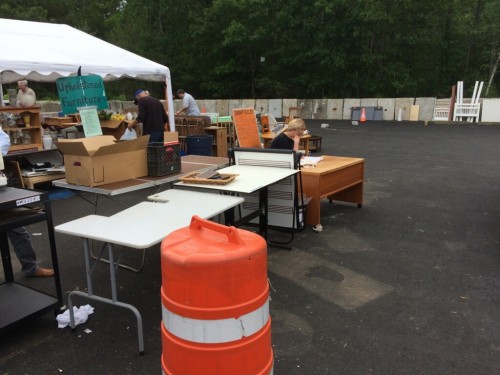 Renee Romanowski was nominated for recognition in the 2018 MFi Volunteer Awards by her husband, Joe Romanowski.  This was Joe’s enumeration of all the many things Renee has done for Medfield:

How many years has the nominee be donating her/his time? 20+

Although I am nominating Renee Romanowski for her recent work as the Angle Run Treasurer for the past 4 years for the Medfield Foundation’s Angel run, her volunteer work has been ongoing without the desire of recognition. As a matter of fact, I am making this nominating without her consent as I know she would not want the limelight. Holding a Master’s degree in Counseling Psychology, Renee made the tough decision to leave her growing career over 20 years ago to raise a family in Medfield and has carefully balanced parenthood and a new career of volunteerism. She is a silent and constant force when it comes to helping her community schools, local families and especially the children. We have lived in Medfield for over 27 years and have seen many changes in it’s landscapes and culture. It is because of the hard work of selfless volunteers like Renee that make this town a desirable location for future families who flock to our town to raise their families. It is always hard to quantify volunteer impact however based on the desirably of our Medfield School system and rising home values, I believe there has been a great impact by Renee and her volunteer colleagues.Here are just a few of the projects that Renee has worked on:Medfield Foundation Inc (MFI) 4+ years – Treasurer – Participant runner Medfield Coalition for Public Education (MPCE) 5+ years – Board Member – Chairperson & Event Coordinator – Treasurer Medfield Script Program – Treasurer (managed almost $1mm each year)Medfield Food Cupboard – Current volunteer Medfield Pub-Crawl – Current Co-Chairperson The Medfield Pub-crawl that has raises money and awareness for CURE-SMA to support a local family’s quest to find a cure. This fun and rapidly growing event has raised well over $25K over the last 4 years.Medfield Neighbor Brigade – Frequent participant Other Misc Events – Room parent – Volunteer Extreme Home Makeover for The Johnson Family – Volunteer Tangerini Farms for school events – Countless school activities for 3 children”

The Department of Housing and Community Development (DHCD) sent the town a letter, received today (a copy of the letter appears below), approving Matt Borrelli’s Local Initiative Program (LIP) the Board of Selectmen approved at 80 North Meadows Road, called Hillside Village.  It is to be located built into the steep slope to the left of the Godard School, on the same lot as the school and sharing the existing entrances and exits.

The sixteen units of Subsidized Housing Inventory (SHI) produced by this LIP, when combined with the eight units of SHI from Bob Borrelli’s LIP at 71 North Street, next to his already open LIP at 67 North Street, will give the town another year of safe harbor from unfriendly 40B projects.

The Affordable Housing Trust Committee continues to do an effective job of lining up enough Subsidized Housing Inventory units each year to keep us in a safe harbor. 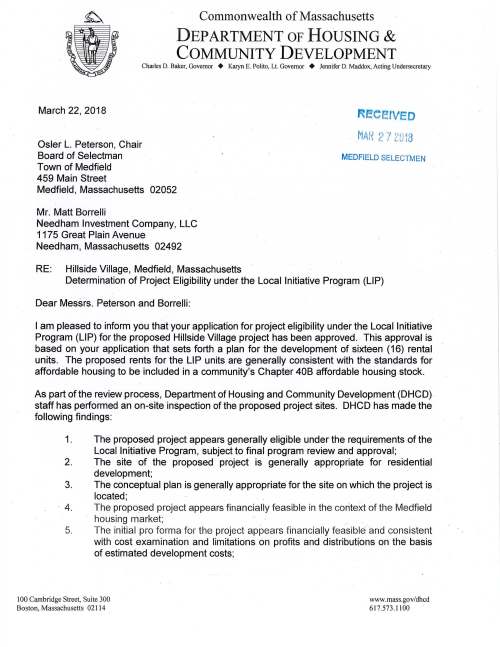 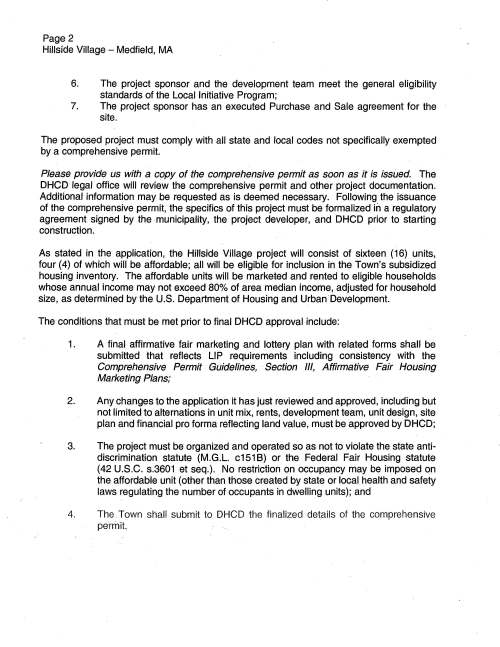 Posted in Affordable housing / 40B, Development Janie Boylan was nominated for recognition in the Medfield Foundation volunteer awards by Meghan Glenn.  This was Meghan’s wonderful description of all that Janie has accomplished:

How many years has the nominee be donating her/his time? 7 years

Janie has never met a challenge that she was not willing to take on. While starting as a classroom volunteer, room parent, and chairperson of a PTO committee, Janie now serves as an active member of the Medfield Coalition for Public Education, Girl Scout and Daisy Scout Leader, and member of the All Night Graduation Party decorating Committee. (She is also the resident artist who sells lovely water colored cards and custom paintings of homes through out Medfield.) Besides being the MCPE graphic artist, Janie has completely revamped the web design for the Coalition, helped in setting up and running the online auctions, Spelling Bee, Trivia Nights, and will chair the 2018 Fall Ball. She will serve as the co-President next year. Janie also co-chaired the Winter Carnival Committee from 2013-2016. In addition to creating and maintaining a webpage for the carnival, Janie oversaw the organization and handling of the over 300 volunteers needed to run an event like the carnival. Likewise, she was pivotal in organizing all games and procuring toy donations from various businesses to use as prizes. In fact, from January to March for years her living room was taken over by boxes upon boxes of toys and prizes waiting to be won. Her tireless energy, commitment to work, limitless creativity and positive attitude is inspiring. As a leader to the Girl Scouts, Janie has created a town wide website as well as provided positive role modeling to groups of young Medfield girls for 6 years now. Currently, Janie has taken an active role in helping her 5th grade troop achieve a “Bronze Award” for their work in educating the town about pollinating bees. She has been instrumental in organizing such events as “Boo Bowling” and the annual Daddy daughter dance. Janie also lends her artistic abilities to the All Night Graduation Party committee and has helped create the fantastic decorations that grace the halls of the high school for our graduating seniors. In addition to all of her endeavors, Janie is also mother to three children in the Medfield School system and a wonderful and generous friend. She is very humble about all her contributions to our town and this is why I feel she should be recognized for her hard work!

The public is invited to the reception that will honor all the nominated volunteers at 3PM on Sunday April 8 at The Center.

The Medfield Foundation volunteer awards are made possible through the generous sponsorship of Roche Bros. and Brothers Marketplace, as well as a contribution for Rockland Trust.

My sincere thanks to the 1172 residents who cast a vote for me yesterday!  The following are the results posted by Town Clerk, Carol Mayer.

Leo Brehm defeated Maryanne Sullivan in the school committee race 818 to 622.  It appears that Eric Lussier was elected a trust fund commissioner with 14 out of the 44 write in votes. 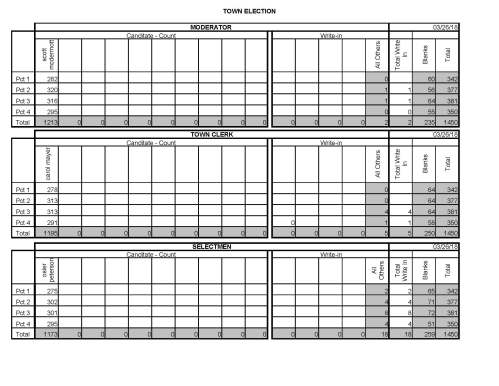 Comments Off on Election results

Voting is at The Center.  Polls open until 8PM.

Comments Off on Election today

Posted on March 23, 2018 | Comments Off on Medfield officially a Green Community

This email from the Department of Energy Resources (DOER) this afternoon, forwarded from Mike Sullivan, announces that the Town of Medfield is now an official green community under the state’s Green Communities Act, and we can start spending our $148K DOER grant monies.  The Facilities Director, Jerry McCarthy and the Medfield Energy Committee plan to use those monies on upgrading the outdoor lighting around town buildings and retro-commissioning of the HVAC controls at the Blake Middle School, as those were easy and fast projects, with good rates of return, to get accomplished.  Since, only once we spend all that initial $148K of grant money, we can then apply for further DOER grants, to do more improvements.

DOER signed the contract so the town has an effective date (March 23, 2018) and can begin work and obligate funds. The town can proceed with approved measures.

Attached is the page one with DOER signature, but when I have the contract back from our fiscal dept. with a contract ID # I will send a scan of the full contract.

Progress reports are expected quarterly, see attached for overview of what to include if applicable. Even a brief email is OK to keep me informed.

Comments Off on Medfield officially a Green Community

These are the Board of Selectmen agenda and informational materials:

Posted on March 23, 2018 | Comments Off on Celebrate “Hazardous Waste Day” this Saturday

Just wanted to let you know that this Saturday is Household Hazardous Waste Day in Medfield.  It is from 9 – 1 and held at the Town Garage/DPW Building.

Here is a link to items for the HHW day.

Did you know that you can access Household Hazardous Waste disposal year-round?  We are part of a consortium and have access to facilities in other towns all year long.   If you need to access them, you do need a form from o ur DPW so contact them at 508-906-3003.

Comments Off on Celebrate “Hazardous Waste Day” this Saturday