Comments Off on House budget #s

The Select Board meets tomorrow night, mainly to interview the candidate for the fire chief position.  We also meet nest Tuesday.  The agenda and informational materials for the April 17 meeting are available here – 20180417-agenda

The House budget is out this afternoon, and from my look I compute that it is about $25K more in Chap. 70 aid for Medfield that the Governor’s budget.  This is the Massachusetts Municipal Association alert –

• LEVEL-FUNDS MOST OTHER MUNICIPAL AND SCHOOL ACCOUNTS

Earlier this afternoon, the House Ways & Means Committee reported out a $40.98 billion fiscal 2019 state budget plan to increase overall state expenditures by 3.1 percent. The House Ways and Means budget is $83 million more than the budget filed by the Governor in January, increasing Chapter 70 aid by $21 million above the Governor’s recommendation by increasing minimum aid from $20 per student to $30 per student. The full House will debate the fiscal 2019 state budget during the week of April 23.

Later Today or Early Tomorrow – Click on this Link to See Your Community’s Local Aid and Preliminary Cherry Sheet Numbers in the House Ways & Means Budget, as Posted by the Division of Local Services

In a major victory for cities and towns, the HW&M fiscal 2019 budget plan would provide $1.1 billion for UGGA, a $37.2 million increase over current funding – the same increase proposed by Governor Baker. The $37.2 million would increase UGGA funding by 3.5 percent, which matches the projected growth in state tax collections next year. Every city and town would see their UGGA funding increase by 3.5 percent.

CHAPTER 70 MINIMUM AID WOULD INCREASE TO $30 PER STUDENT

The House budget committee is proposing a $125 million increase in Chapter 70 education aid (this is $21 million higher than the $103.6 million increase in House Two), with a provision that every city, town and school district receive an increase of at least $30 per student (compared to the $20-per-student amount in the Governor’s budget). The House budget would continue to implement the target share provisions enacted in 2007. Further, the House Ways & Means Committee proposal would build on the Governor’s initial proposal to start addressing shortfalls in the foundation budget framework, by increasing the cost factors for employee health insurance by $39 million more than in fiscal 2018.

In the context of a tight budget year, the House budget committee’s increase in Chapter 70 funding is progress over the Governor’s proposal that was filed in January. The MMA continues to give top priority to full funding for the Foundation Budget Review Commission’s recommendations, and over the long-term will work to build on this increase.

Please ask your Legislators to support a funding increase for Chapter 70 school aid that ensures that all schools receive a suitable and appropriate increase in fiscal 2019, which the MMA targets at $100 per student. The MMA also strongly supports implementation of all of the recommendations of the Foundation Budget Review Commission to update the Chapter 70 “foundation budget” minimum spending standards for special education and employee health insurance, and to add to the spending standard a measure of recognition for the cost of services for low-income, English Language Learner (ELL) and other students who would benefit from more intensive services. The Commission recommended phasing in the changes over a four-year period, a position the MMA supports as well. Increasing minimum aid and fixing the inadequacies in the foundation formula are essential.

In H. 4400, House leaders have announced that they support increased funding for the Special Education Circuit Breaker program. The House budget plan would provide $300 million, an $8.9 million increase above the Governor’s proposed fiscal 2019 level of $291.1 million, and $18.8 million more than the $281.2 million fiscal 2018 level. However, the House budget would still be about $23 million short of full funding in fiscal 2019. This is a vital program that every city, town and school district relies on to fund state-mandated services. The MMA and local leaders will work to build on this increase to get to full funding during the Legislature’s budget deliberations.

House Ways and Means Committee budget would add $1 million to bring regional transportation reimbursements up to $62.5 million, compared to the Governor’s proposal to level fund the program at $61.5 million. The MMA will work to continue building on this increase to get to full funding.

CHARTER SCHOOL REIMBURSEMENTS WOULD BE FUNDED AT $90 MILLION

Both budgets filed by the Governor and the House Ways & Means Committee would underfund charter school reimbursements in fiscal 2019. The HW&M budget would provide $90 million, compared to the Governor’s recommendation to level fund the program at $80.5 million. Both proposals are far below the amount necessary to fully fund the statutory formula that was originally established to offset a portion of the funding that communities are required to transfer to charter schools. The fiscal 2018 funding level is $73.4 million below what is necessary to fund the reimbursement formula that is written into state law. If the HW&M amount is enacted, the shortfall will grow to an estimated $76.8 million in fiscal 2019. This would lead to the continued and growing diversion of Chapter 70 funds away from municipally operated school districts, and place greater strain on the districts that serve 96% of public school children. Solving the charter school funding problem must be a major priority during the budget debate.

Please Explain How the House Ways and Means Budget Impacts Your Community, and Ask Your Representatives to Build on this Progress During Budget Debate in the House

Comments Off on House budget gives us $25K more 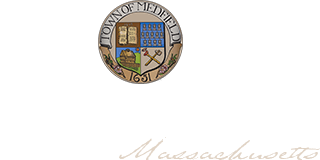 The fabricator/manufacturer has completed the top bridge deck and will be coordinating with the installation contractor for delivery.  Final contracts for the installation contractor are scheduled to be signed on April 12th. Once the manufacturer and contractor have agreed upon a delivery date, a schedule can be determined for the work. We will update the website with the new schedule as soon as it becomes available.

Comments Off on Philip Street bridge

Adults and children throughout Medfield have happy memories of summer camp. From a traditional experience in the woods to skill building or specialized camps, many Medfielders cherish these summer camp experiences and the friends they made there…How would you feel if you were left out of this experience?

Before the summer camp season begins, the Medfield Foundation (MFi) board wants the town to know that there is a highly significant need for assistance by families whose children yearn to attend camp,  but because of difficult financial situations at home they would be unable to attend. It can be challenging to grow up in an affluent community but not have the resources of friends’ families.

The Medfield Foundation encourages you to make a tax deductible donation to help Medfield children attend summer camp! There are easy ways to make your donation or to find out more:

Last year, due to the severity of the need and number of children affected, the Medfield Foundation Board responded by creating the Children’s Camp Fund. Together with the generosity of our Medfield donors, $4,700 was raised which ensured 14 weeks of Medfield’s Parks and Recreation Summer Adventure Camp were enjoyed by a number of children, while others were provided summer swim lessons along with family memberships at Hinkley Pond. As a result of that success the Medfield Foundation Board unanimously voted to make the Children’s Camp Fund an ongoing fund, and this year hope to raise $5,000 so that this summer even more children who would otherwise be unable to go to camp can experience that rite of childhood summers!

The Medfield Foundation (MFi) is a 100% volunteer run 501(c)(3) non-profit charitable corporation whose mission is to enrich the lives of Medfield residents, build a stronger community, and facilitate the raising and allocation of private funds for public needs in the town of Medfield. Since its inception in 2001, the Medfield Foundation has raised over $2 million to support community-wide initiatives in Medfield.

MFi was founded based on the realization that some residents were interested in contributing more than town taxes to support projects and services that would enrich life in Medfield. Annual fundraising revenue varies each year as the initiatives and needs in the town change. You are urged to go to http://medfieldfoundation.org/.

Posted on April 10, 2018 in Fire Department, Select Board matters

Posted on April 10, 2018 | Comments Off on Mental health information

Last night while attending the Warrant Committee meeting at the Public Safety Building, I picked up one of the relatively new INTERFACE referral cards (a copy of the card appears below).  The Town of Medfield signed on with INTERFACE starting in November, and since then any resident can INTERFACE to get a referral to a mental health professional.  The back of the card lists other mental health resources.

Comments Off on Mental health information

Colleen Sullivan’s photograph of the whole crowd involved in making the Medfield Foundation volunteer awards happen, except Gus Murby, who only got his foot in this photo and someone on the left (unless Mike Marcucci now really has two sets of arms).