Posted on June 4, 2022 | Comments Off on MSH Due Diligence Information

Comments Off on MSH Due Diligence Information

Posted on June 2, 2022 | Comments Off on Trinity holding 6/9 public forum on its proposed development of MSH site

Trinity’s flyer in today’s Hometown Weekly appears below. The special town meeting (STM) to vote on the proposed deal with Trinity has been scheduled for June 21. The Land Disposition Agreement setting forth the details of the proposed deal should be made public soon – Select Board meeting in executive session at 4PM this afternoon about that LDA.

Trinity Financial’s due diligence investigation is ongoing, as are the negotiations over the details of the terms. The plan is to have a special town meeting (STM) in June at which residents will decide whether they want the deal with Trinity and the development Trinity proposes. The Trinity proposal closely tracts the building reuse and housing numbers that our town study committee recommended.

From the Town of Medfield –

Comments Off on MSH development FAQ – read up for STM

Posted on January 28, 2022 | Comments Off on MBTA Communities Law requires multifamily zoning in town or we lose state grants

At issue is that new zoning reform law — the MBTA Communities Law – that’s designed to chip away at two urgent problems: Our housing crisis and our climate crisis.

As I wrote yesterday, the new law doesn’t mandate new housing. It changes zoning codes to allow property owners to build small multi-unit homes if they choose — a process that could take years, or decades, if ever.

We’re not talking about massive apartment towers. The law is designed to encourage more townhouses, triple-deckers and carriage houses near T-stops — instead of McMansions.

Failure to rezone would make a community ineligible for certain state grants, according to draft regulations.

See also the white paper done by the Boston Foundation on this legislation.

MSH press release from Select Board

Posted on January 6, 2022 | Comments Off on MSH press release from Select Board

MEDIA RELEASE – FOR IMMEDIATE USE

MEDFIELD, MA –The proposed redevelopment of the Medfield State Hospital has achieved a critical milestone, with the Board of Selectmen voting unanimously to designate the proposal submitted by Trinity Financial of Boston, MA as the most advantageous received in response to its Request for Proposals issued on April 5, 2021. The Board of Selectmen further authorized the Medfield State Hospital Development Committee to negotiate a provisional development agreement with Trinity Financial for its review.

The agreement, expected to be executed by the Board of Selectmen later this month, would grant Trinity Financial an exclusive period to conduct additional due diligence activities on the site, further advance its financing assumptions, and more fully engage with Town officials to address remaining questions or potential concerns regarding the proposal.

Town Administrator Kristine Trierweiler said, “We look forward to working with Trinity, the Development Committee, and other relevant Town boards and committees to drill down further on Trinity’s proposal, continue to evaluate impacts to the Town, conduct additional technical reviews, and seek adjustments to the proposed redevelopment, if necessary.”

Although the Trinity designation is an important step, there are still several more steps in the process.

“After the due diligence process is complete and the Town has drafted a Land Disposition Agreement with Trinity that incorporates any negotiated changes to their proposal, the proposed sale of the property will need to go before Town Meeting for approval,” said Trierweiler.

Throughout this process, the Town has sought public input and looks forward to continuing to engage with residents about this potential redevelopment. If approved by the voters at Town Meeting, Trinity still must complete required design and permitting reviews for the site, with construction activity likely beginning no sooner than 2023.

Trinity Financial’s proposal calls for the development of up to 334 apartments on the site through the renovation of existing buildings using federal and state historic tax credits. The proposal would maintain the campus’ extensive open space areas and provide for continued public access to the property, while also complementing the Cultural Arts Center proposed by the Cultural Alliance of Medfield.  The planned development will incorporate sustainability measures to reduce environmental impact subject to historical rehabilitation standards.   In accordance with Town Zoning bylaws, 25% of the apartments would be designated as affordable housing, with a potential partial set-aside for artist housing, and the remaining 75% of the project will be market-rate. The proposal as submitted is generally consistent with major elements of the Town’s Strategic Reuse Master Plan for the Medfield State Hospital campus that was developed with extensive community input between 2014-2018.

In addition to the Trinity proposal, the Town received a proposal with three different development scenarios from Pulte Homes of New England.  All three Pulte Homes scenarios included demolition of existing buildings, with the two variations applicable to the historic “core campus” calling for between approximately 600-700 newly constructed for-sale or rental housing units. In exchange for denser development, Pulte Homes proposed a higher purchase price to the Town. Proceeds from the sale of the property are required to be split with the Commonwealth of Massachusetts in accordance with the Land Disposition Agreement between the Town and Commonwealth.

“The Trinity Financial proposal received higher ratings from Development Committee members across all evaluation categories identified in the Request for Proposals and comments from all stakeholder groups and the general public were significantly more favorable,” said Todd Trehubenko, Chair of the Development Committee.

The Development Committee, which unanimously recommended that the Board of Selectmen designate Trinity, noted that the proposal is intended to fund all of the project’s infrastructure costs as part of the construction and according to Trinity’s projections will generate over $700,000 per year in net tax revenues to the Town.

“Trinity’s proposal represents a less intensive use of the site than competing proposals, and at the same time was the only proposal received that would put Medfield well-above its town-wide 10% affordable housing goal for the foreseeable future,” said Trehubenko.

The Town’s Request for Proposals was issued in April 2021 after several rounds of public comment. Responses were due by August 2, 2021 and were posted to the Town’s website.  Proposals were then reviewed over the next 90 days through a process led by the Development Committee.

The potential sale of the Medfield State Hospital is subject to state laws governing the disposition of public property, M.G.L. c. 30B §16. Technical assistance was provided to the Development Committee by Peregrine Group (Rumford, RI) through funds made available by MassDevelopment, the Commonwealth’s development finance agency.

The Medfield State Hospital is a historic former psychiatric hospital campus in Medfield, MA, established in 1892 as the state’s first facility built specifically for chronically ill mental patients. The campus was designed by William Pitt Wentworth and developed between 1896 and 1914.  At its peak the complex included 58 buildings and had a capacity of 2,200 patients. The property and buildings were closed in April 2003, after decades of declining population. The grounds have since been reopened to the public for passive recreation from dawn to dusk, while the buildings remain closed.  Some of the buildings have been demolished. For more information, please go to http://www.town.medfield.net/556/Medfield-State-Hospital-information .

Comments Off on MSH press release from Select Board

Trinity Financial was interviewed by the Medfield State Hospital Development Committee last night with respect to Trinity’s proposal to develop the former Medfield State Hospital site. My sense was that Trinity is willing to be exceedingly flexible, and to listen to and consider proposals for changes to what the town wants, if the town wants to further tailor the result to precisely what the town desires. So far Trinity proposes 334 rental units in the existing buildings, 25% affordable, meaning that all 344 should get added to the town’s SHI list of affordable housing units.

Last night’s interview with Trinity has been posted onto YouTube:
https://youtu.be/bO6V-9hHCl0?t=70

Posted on August 19, 2021 | Comments Off on Town received two proposals for MSH site

The town received two responses to its RFP’s to redevelop the former Medfield State Hospital site. The links to the proposals are below.

Trinity Financial proposes 334 rental units that would be in all the existing rehabilitated building (less the maintenance building and dining hall, which Trinity would demolish). Trinity would pay the town $2m.

Option A Price Proposal /Total Consideration : $7,696,000 The first development option will only utilize the Arboretum Parcel and will consist of 73 non-age restricted forsale residential townhomes. There will be 54 market-rate residences and 19 affordable-rate residences. The affordable-rate residences will make up 25% of the total amount of residences which is in conformance with the affordability requirements in the Medfield State Hospital District. The proposed purchase price for Option A is $ 7,696,000. The proposed purchase price may increase or decrease based on the number of market-rate residences approved by the Town of Medfield on the Arboretum Parcel.

Option B Price Proposal/Total Consideration: $29,158,000 The second development option will utilize the entire disposition property (West Slope, Core Campus, and Arboretum Parcel). This development option will consist of 602 non-age restricted for sale residences in a mix of garden-style residences and townhome residences. There will be 451 market-rate units and 151 affordable-rate units. There will be 450 garden-style residences and 152 townhome residences. The affordable-rate residences will make up 25% of the total amount of residences which is in conformance with the affordability requirements in the Medfield State Hospital District. The proposed purchase price for Option B is $ 29,158,000. The proposed purchase price may increase or decrease based on the number of market-rate residences approved by the Town of Medfield on the disposition site.

This is what the existing Pulte built development at the former Walpole Woodworking site looks like with the same sort of buildings:

On Monday, August 2, 2021, the Town received two proposals, which can be accessed here: https://www.town.medfield.net/2004/Redevelopment-Proposals

The Town released a press release announcing it received two proposals which can be found here.

The Request for Proposals and the posted addenda that were released by the Town can be accessed at this link: https://www.town.medfield.net/2003/Medfield-State-Hospital-RFP

Please contact Assistant Town Administrator Nicholas Milano with any questions at nmilano@medfield.net or 781-856-5287.

Additional information about the Medfield State Hospital can be found here: https://www.town.medfield.net/556/Medfield-State-Hospital-information

Comments Off on Town received two proposals for MSH site

Posted on June 4, 2020 | Comments Off on Clark Tavern 5 condo proposal

The application to turn the Clark Tavern into a five unit condominium development (two in the renovated/expanded existing structure and three all new behind) has been filed and the plans are now available on-line at the town website. 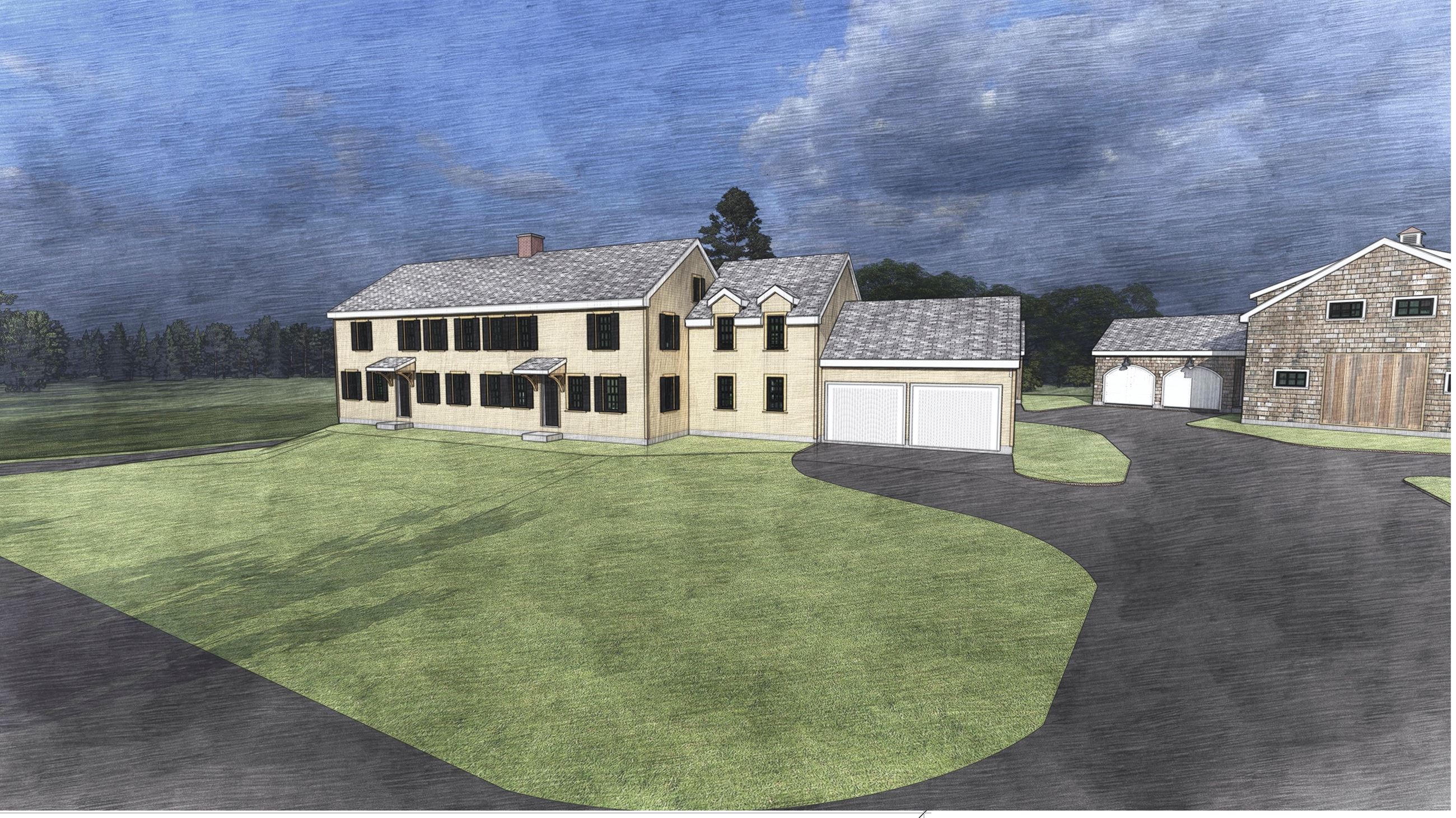 The project requires the following approvals under the Medfield Zoning Bylaw:

Section 5.6 (ZBA Special permit for historic properties, adaptive reuse) 14.10 (ZBA special permit criteria), and 14.12 (PB site plan approval). The Medfield Board of Health will also review the stormwater component of the application per their more stringent rules and regulations.

More information will be posted as it is received.

Today the Zoning Board of Appeals issued its decision approving the 56 unit 40B rental complex called the Aura, to be constructed at the site of the former Legion.  The development both hopefully creates an endowment for the Legion from the purchase price and reportedly allows the Legion the use of the Aura’s common room facility for the Legion’s meetings.

Comments Off on Aura approved by ZBA