My wife, attorney Deb Bero, is looking to share or sublet part of her four room office at 66 North Street, Medfield (next to post office). First floor has a reception area and a conference room, and there are two separate offices on the second floor. She is open to exclusive or shared use of either the conference room or either second floor office (one huge and one average size), with or without access to the first floor conference room.  Price varies depending on amount of use and exclusiveness – starting at $350/month for office without conference room access.  Conference room can also be rented on a per use basis.  Deb Bero can be reached at 508-269-9364.

The special town meeting (STM) is on Monday, October 29 at 7:30 PM at the Medfield High School gym.

The Board of Selectmen will hold a meeting just before the STM, including an executive session to try to work out the terms of employment for Kristine Trierweiler, the new town administrator.

The Friends of the Medfield Rail Trail (FMRT) announced that they will be joining forces with the Medfield Foundation (MFi) to become MFi’s newest initiative!  Established in 2001, MFi has enabled grass roots initiatives like the FMRT to raise private money for the benefit of all of Medfield.

Christian Donner, a longtime member of the FMRT said “we are raising monies for the construction and maintenance of the 1.3 mile stretch of the Bay Colony Rail Trail in Medfield, which will run from Ice House Road to the Dover line, along the former Bay Colony Railroad tracks, now owned by the MBTA.”  The MBTA will lease the railroad right of way to the town without cost for 99 years. It is hoped that the FMRT can eventually run the full seven miles from Medfield to Newton, connecting all of the towns along the way.  This fall, the Mass Department of Conservation and Recreation awarded Medfield with a $100,000 grant.  FMRT needs the generosity of Medfield citizens in order to meet its goal of raising another $100,000.00 so that construction can commence in 2019!

MFi (www.MedfieldFoundation.org) is a volunteer-run private nonprofit, tax deductible 501(c)(3) corporation created specifically to raises private monies for public purposes in the Town of Medfield, Massachusetts.  A variety of planned giving opportunities are available on our website.

NB – photo shows rail line several years ago, before the pine trees met in the middle.

Town Status on the Rosebay Project

I have been asked enough about the status of the Rosebay project that I thought I would share what I know.  Rosebay is the private development proposal for 45 units of senior affordable housing on Medfield Housing Authority land that is directly adjacent to Tilden Village on Pound Street.  Rosebay would be all seniors, all rental, and all affordable.  The developer is Brian McMillin of NewGate Housing LLC of Westwood, who was selected by the Medfield Housing Authority.  Brian McMillin previously worked for Gatehouse, at the time Gatehouse built The Parc in Medfield.

In general, the Board of Selectmen have been pushing to have more affordable housing, especially for seniors, so conceptually I support the Rosebay project.

The Town of Medfield is in a good spot at the moment with respect to unfriendly 40B proposals because we are currently in a safe harbor, meaning that:

I believe that we have about another year and a half of safe harbor remaining, but we also have several irons in the fire that could extend that time frame.

So as long as we remain in that safe harbor, the Zoning Board of Appeals of the Town of Medfield can turn down any 40B that it does not like on the basis that we are in that safe harbor, and the developer cannot end run the town by appealing for state approval to the Housing Appeals Committee (HAC) at the DHCD for an approval.  The HAC routinely approves any developer’s 40B developments turned down by towns, but the HAC will not overturn a ZBA denial based on our being in a safe harbor, while we continue to be in that safe harbor.

The Board of Selectmen will soon send a letter to Department of Housing and Community Development opining about the suitability of the Rosebay project in general, and we would welcome citizen input as part of our formulation of that letter.

In this instance the Zoning Board of Appeals will be the main town entity that will deal with the nuts and bolts issues of the Rosebay project, and that will seek to ameliorate the proposed project and its impacts on both the neighbors and the town.  The ZBA has even greater than usual control over the Rosebay proposal, because of the fact that we are in a 40B safe harbor, and any ZBA denial should be supported by the HAC.

I am trusting the Zoning Board of Appeals to see that the details are worked out as well as they can be so as to minimize the impacts and effects of the project on the neighbors. 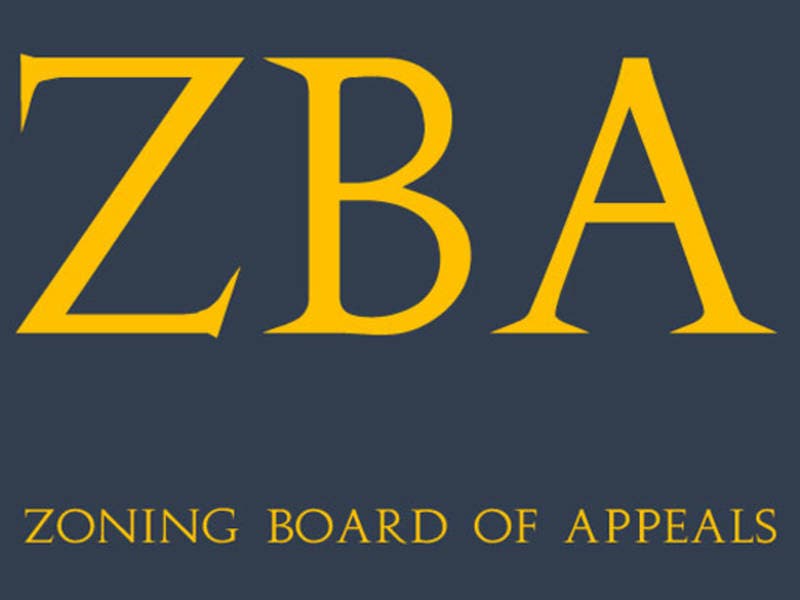 Medfield Zoning Board of Appeals Vacancy

The Town of Medfield Zoning Board of Appeals (ZBA) is seeking to fill a vacant Associate Member position. Anyone who may be interested should submit a letter of interest to Evelyn Clark at eclarke@medfield.net in
the Board of Selectmen’s office by August 9, 2018. For questions regarding the ZBA or this specific position please contact Sarah Raposa, Town Planner at sraposa@medfield.net.

The Zoning Board of Appeals is an appointed board and acts as a quasi-judicial body deciding whether or not to vary from the Zoning By-Laws. The Zoning Board is empowered to act on appeals, special permits, variances, modifications and comprehensive permits, in accordance with applicable sections of Massachusetts General Laws and the Town of Medfield Zoning By-Laws.Virtually all matters which come before the Board are initiated by residents or businesses seeking relief from the Zoning By-Law. Each application is
processed in accordance with the legal requirements and timetables established under the Massachusetts Zoning Act, the ZBA Rules and Regulations and the Medfield Zoning By-Laws.

The Zoning Board of Appeals holds public hearings on applications for zoning variances, special permits and decides appeals of administrative decisions of the Building Commissioner. Hearings are generally held on
the second Wednesday of the month at 7:30 pm in the Chenery Room in Town Hall, 459 Main Street.

Letters should describe your interest in the ZBA as well as any professional experience or other qualifications that will complement the Board. Additionally, please contemplate the following in your letter of interest: Land use boards such as the ZBA do not always have the kind of discretion to approve or deny a specific project that residents often think they have. It is important to recognize and avoid any conflict of interest; not to pursue special privileges, and maintain confidentiality. Are you prepared for being thought of as a villain by some and a hero by others?

On November 6th, Election Day, while casting your vote for the candidates and initiatives that you support, please consider bringing financial or food donations to the polls in support of the Medfield Food Cupboard.  Especially needed items for the fall and winter months are: rice, tuna, spaghetti, jelly/jam.

The polls will be open at The Center at Medfield from 6 AM until 8 PM, and donations may be dropped off any time during this window. Food Cupboard volunteers will be present throughout the day to collect donations and answer any questions you may have.

Those interested in supporting the Medfield Food Cupboard throughout the year may do so by placing unexpired, unopened, shelf-stable food in the collection bins at Shaw’s, Medfield Public Library, Pfaff Center, Senior Center, the Medfield churches, or monetary donations can be made on line at: medfieldfoodcupboard.com or mailed to: PO Box 172, Medfield, MA 02052.

The Town of Medfield has received notice (from the Developer) that DHCD is currently reviewing an application for Site Approval submitted by NewGate Housing LLC (the “Applicant”). The proposed development will consist of 45 age restricted (62+) rental units comprised of 37 one-bedroom units and 8 two-bedroom units contained within one residential building with amenities, facilities, driveways/roadways and associated infrastructure on ~2.4 acres.

Access to the site will be provided from Pound Street. The project will access the utility infrastructure located on Pound Street, including sanitary sewer, water, gas, electric, telephone and cable. The stormwater management system will be designed to fully comply with all the standard of the MA DEP Stormwater Management Regulations. The Applicant is proposing that all units (100%) will be identified as affordable units for the Town’s Subsidized Housing Inventory.

The application may be viewed on the Town’s website: HERE

Should DHCD deem the conceptual design appropriate for the site, the Applicant is then allowed to submit a formal comprehensive permit application to the Medfield Zoning Board of Appeals for this project.

As part of its review, DHCD will conduct a site visit, which Local Boards[1] may attend. The site visit for The Rosebay at Medfield has been scheduled for Tuesday, November 6, 2018 at 10:00 am. Please meet at the project location (at or near 30 Pound Street).

Please inform us of any issues that have been raised or are anticipated in the review of this application within 7 days of the site visit so that comments may be incorporated in to the Board of Selectmen’s municipal comment letter.

[1] Local Board – means any local board or official, including, but not limited to any board of survey; board of health; planning board; conservation commission; historical commission; water, sewer, or other commission or district; fire, police, traffic, or other department; building inspector or similar official or board; city council or board of selectmen.  All boards, regardless of their geographical jurisdiction or their source of authority (that is, including boards created by special acts of the legislature or by other legislative action) shall be deemed Local Boards if they perform functions usually performed by locally created boards.

Posted in Affordable housing / 40B, Seniors

Letter from the Medfield Food Cupboard, courtesy of Susan Maritan –

Dear Friends, Volunteers and Supporters of the Medfield Food Cupboard,

This past week the c communications. In the appeal we ask for the community’s help and support. The Food Cupboard depends on donations of money, food and time to keep our shelves filled and our organization running smoothly. Last year, with the assistance of the community, we were able to provide enough food for our clients to make over 4,000 meals — an accomplishment about which we can all feel proud.

Please visit our website to read our annual appeal newsletter or to donate to this important cause: medfieldfoodcupboard.com

For your dedication to our shared mission we are most grateful.

The Massachusetts Municipal Association’s Massachusetts Selectman’s Association is holding its fall training for selectmen today from around the state in Devens. Programs are over and we are hearing now from Lieutenant Governor Karen Polito. State is providing grants for small bridges and IT.

Gus Murby and I car pooled.

As always, some useful ideas. Ironically, one program was on how to hire a town administrator, which Medfield only does every 43 years, so I will file that away for 43 years from now.