Will Bento in TV 25 story on police academy at FSU

Medfield resident William Bento is featured in the Boston25News.com story below.  Will is enrolled in the police academy at the Fitchburg State University, and is on a list to become an officer in the Medfield Police Department.  Look carefully and you can see the MPD patch on his shoulder in this news story.

The Medfield Bento’s are a police family, as Will’s sister, Michelle Manganello, is an officer in the MPD, serving as the town’s School Resource Officer, and Will father, David Bento, is a Lieutenant on the Sherborn Police Department. 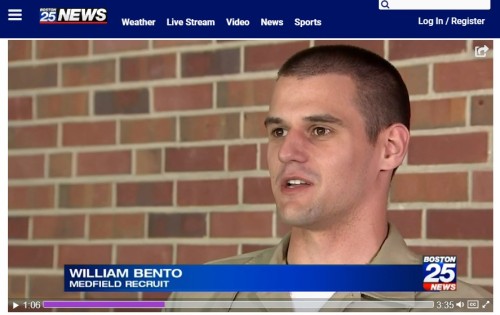 FITCHBURG, Mass. — Just as police departments across the state are experiencing reform right now, so are the police academies, where future officers are learning what it takes.

Boston 25 News has been closely following recruits for months, and spent the day at the Fitchburg State Police Academy, to see how educators there are dealing with the civil unrest head-on.

The recruits recently got candid lessons from current officers on protecting and serving the community, including Harvard, Massachusetts Police Chief Edward Denmark.

“There have been times where I’ve used force in my past and a lot of that was anger,” Chief Denmark told the recruits. “I got so wrapped up in what my task was in that moment, as opposed to what my purpose was in the bigger picture.”

The recruits are also dissecting mistakes officers around the country have made in hopes of avoiding similar situations. For example, recruits had to write a two-page essay on what the four officers did wrong in the George Floyd incident.

“When we spend 15 weeks here, you do what you’re told here when you’re told to do it and nothing more. I think it can be challenging to get out on the street and confront a veteran officer, but those are the skills that we are learning here to be able to step up and make those tough decisions,” Medfield Police recruit William Bento told Boston 25 News reporter Wale Aliyu.

Fitchburg State University Police Academy has a model of training and educating the recruits simultaneously, which they say is the first in the country.

“Research has shown that educated officers have less ‘use of force’ incidents, they have less deadly force incidents, they are better problem solvers,” academy director Lisa Lane McCarty said. “To their credit, this is not a great time to be going through a police academy. And they have these faces on that say ‘they will be the change,’” she added.

In the five-year program, the 21 recruits will get a criminal justice bachelors, a master’s degree, a police certification, and first-hand lessons on the ethics and nuances of policing.

“They need to understand the limitations of some of the things that we have tried or even some of the things people are suggesting now,” Chief Denmark said. “How is a certification going to change the way someone feels in their heart and their mind? It’s not going to. It may help to make sure we have the right education. But at two in the morning when a fight starts in the middle of the street that doesn’t matter.”

Four of the recruits already have jobs waiting for them. Benjamin Torrence will be joining the short-staffed Haverhill Police Department, and says as an officer of Color, he feels the pressure to bridge the gap.

“I do feel the pressure, but I know I’m not alone,” Torrence said. “I’m excited, my fellow recruits are excited, to get out on the street to make a difference.”

With calls to defund, and dismantle entire departments, these recruits know their goal is to provide change, one interaction at a time.

“We want to be able to change peoples’ perspective if they have a negative outlook on this job,” Bento said.

“This is all fear-driven,” said Chief Denmark. “This is cops fearing people which causes them to have heightened fear and feel they need to use force. And communities of color don’t trust the cops based on the history of this country. This goes far beyond policing so they’re afraid.”

This entry was posted in Information, People, Police Department, Schools. Bookmark the permalink.