The Board of Selectmen held a meeting yesterday afternoon with seniors at The Center, for a no holds barred discussion of the options, status, and timing for senior housing.  I learned a lot.  Selectmen were supported by members of the Medfield State Hospital Master Planning Committee, who did the heavy carrying about explaining the status of that committee’s huge amount of work with respect to the redevelopment of the former MSH site.

Then Gus and I attended an evening regional selectmen meeting in Millis, attended by selectmen from six towns (see Medfield Press article below), where we discussed how each town is dealing with 40B, marijuana, and the new Federal stormwater rules.  I learned a lot there too. 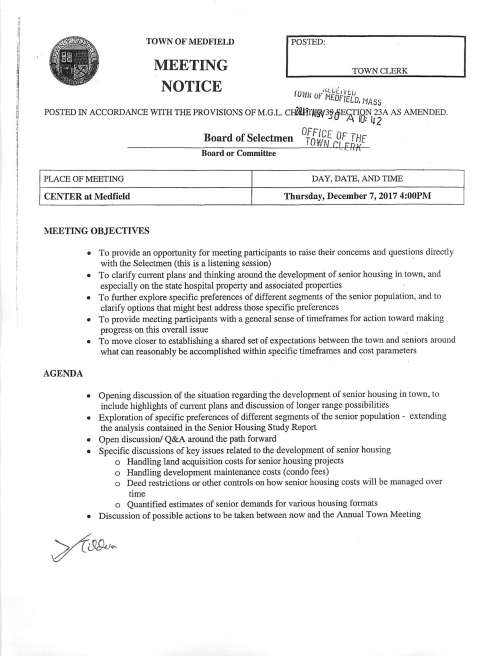 MILLIS – Local officials from several towns led a discussion Thursday on the deficiencies and possible reform of affordable housing rules.

Selectmen from Medway, Ashland, Hopkinton, Holliston, Medfield and Millis – convened in Millis to discuss a number of issues of regional importance, such as stormwater management, retail marijuana regulation and the voting process at town meetings. The towns have met several times over the past year.

“It’s not going anywhere,” he said, noting that a ballot initiative to repeal the rule in 2010 had failed. He added that many towns, when they reach the 10 percent threshold, lose interest in reform.

Boynton said the town had experienced – in the last 18 months – both friendly and unfriendly 40B developments.

Medway Selectman Glenn Trindade said the legislation, as currently written, does not solve the affordable housing problem in the most efficient way. He said apartments are most in demand, but developers want to build houses. With apartments, he noted, the residents’ incomes are reviewed after a period of time to ensure they still quality; the same does not occur with houses or condos.

“What we’ve got with this system is someone hits the lottery (and is awarded an affordable house or condo), and you help one person,” he said.

Fellow Selectman Dennis Crowley said he was concerned about what happened to affordable housing units. He said the town had seen instances in which condo owners had bought their units, refinanced at the market value of the condo, pocketed the difference and left. He also cited incidents in which people owned the units, but moved out and rented them to other people.

“Nobody’s monitoring these units,” he said.

Boynton suggested several reforms to the law. One change would allow towns to prioritize senior housing, while another would tie developments to a municipality’s master plan.

State Rep. Shawn Dooley, R-Norfolk, noted the difficulty of changing the legislation. He said he was pursuing reforms that would allow a slightly higher-priced unit to count as a percentage of an affordable housing unity. He pointed at his hometown of Norfolk as an example of where such housing is needed.

Mike Gleason can be reached at 508-634-7546 or mgleason@wickedlocal.com. For news throughout the day, follow him on Twitter @MGleason_MDN.

This entry was posted in Affordable housing / 40B, Federal Government, Seniors. Bookmark the permalink.